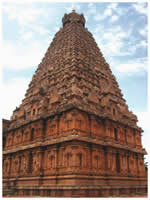 Brihadeeswarar Temple, Thanjavoor, Tamil NaduThe temple for Lord Brihadeeswarar at Thanjavoor, Tamil Nadu is a wonderful creation, built during the reign of Raja Raja Chola 1. He was a mighty king who had vanquished the Chera and Pandya kings of his times and had even conquered territories beyond the Indian shores. Impressed by the magnificent temples and the idols of Buddha he had seen, he dreamt of creating a temple of greater magnitude and grandeur for Lord Siva.
Therefore he caused this temple to be built for the Lord, at Thanjavoor, his capital city.
He engaged a large work force to accomplish the gigantic task which was completed within a period of six years. The structure of the temple consisted of fourteen storeys and was 216 feet in height. What was impressive was the fact that the top of the structure had a solid structure carved out of a single stone weighing 80 tons.
On top of it the ancient engineers had built an octagonal shaped stupa and a 12 feet high kalasam was placed over it. To lift the huge stone to the top, a six miles long inclined road was devised and laid out. Though the Dravidian style of temple predominates, there is indeed a harmonious blend of the Nagara, Vesara and Dravidian styles.
The black Siva Linga, carved out of a single rock is considered to be the second biggest in the country, next alone to the one at Lepakshi. It is 9 feet in height and 23-1/2 feet in circumference. It is installed on a high flat dais measuring 54 feet in circumference and 6 feet in height.
Who were the great architects and engineers  who created this great edifice, at the instance of a great  Maharajah?
Article by : P. N. Santhanagopal
Source: Bhavan's Journal 31 August 2008
To know more about Bhavan's Journal and to subscribe
visit: http://www.bj.bhavans.info/
Posted by Bridge-India at 15:50
Email ThisBlogThis!Share to TwitterShare to FacebookShare to Pinterest
Labels: Temples and Legends : Tamilnadu