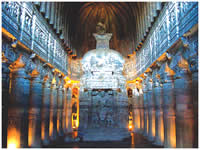 The Ajanta and Ellora caves are located near the city of Aurangabad, Maharashtra. These cave shrines, cut out of rock by hand, rank among the most outstanding specimens of ancient Indian architectural heritage. The 34 caves at Ellora and the 29 caves at Ajanta remained shrouded in obscurity till they were discovered accidentally in 1819 by a British army officer.
The Ajanta caves, lying deep within the Sahyadri hills cut into the curved mountain side above the Waghora River, depict the story of Buddhism, spanning a period from 200 BC to 650 AD.
The Ellora caves, 34 in number, are carved into the sides of a basaltic hill.
These structures representing the three faiths of Hinduism, Buddhism and Jainism were carved during the 350 AD to 700AD period. The 12 caves to the south are Buddhist, the 17 in the center are dedicated to Hinduism and the 5 caves to the north depict Jainism.
These caves of incredibly beautiful creations loudly proclaim to the world how expanded were the minds of the creators of these marvels because they depict three streams of religious approaches, each in perfect harmony with the others.
Who were the creators of these marvels who deliberately had chosen to remain anonymous?
Article by : P. N. Santhanagopal
Source: Bhavan's Journal 31 August 2008
To know more about Bhavan's Journal and to subscribe
visit: http://www.bj.bhavans.info/
Posted by Bridge-India at 15:46
Email ThisBlogThis!Share to TwitterShare to FacebookShare to Pinterest
Labels: Indian Monuments and Places: Maharashtra