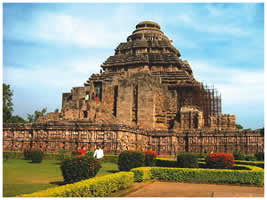 The Temples of the Sun God at Konark
Konark is where the fabulous temple for the Sun God stands. Even in its present ruined state it takes one’s breath away by its sheer magnificence. The temple is also known by the name Konaditya.
The name is derived from the world Kona- corner and Arka- sun. It is situated at the north eastern corner of Puri or the Chakrakshetra. Konark is also known as Arkashetra.
The temple, built in 1278 CE, during the reign of the Ganga King Narasimha Deva, is one of the grandest temples in India. The ruins of this temple were excavated in the late 19th century. The tower over the garbhagriha is missing.
However the Jagmohana is intact and, even in its present state, it is awe inspiring.
The Konark temple is known widely for its architectural grandeur and more for the intricacy and profusion of its splendid sculptures.
The entire temple has been conceived as a chariot of the sun, with 24 wheels, each with a diameter of about 10 feet with a set of spokes and elaborate carvings. Seven horses drag the chariot temple. Two lions guard the entrance, crushing elephants.
A flight of steps lead to the main entrance. The temple reflects the genius of the architects who envisioned and built it. We know when it was built and who caused it to be built.
But who were the people who conceptualised and created this poem in stone?
Article by : P. N. Santhanagopal
Source: Bhavan's Journal 31 August 2008
To know more about Bhavan's Journal and to subscribe
visit: http://www.bj.bhavans.info/
Posted by Bridge-India at 15:44
Email ThisBlogThis!Share to TwitterShare to FacebookShare to Pinterest
Labels: Temples and Legends : Orissa