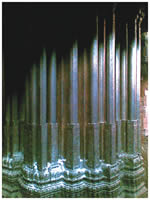 The Musical Stone Pillars at the Shrine of Meenakshi  at Madurai
Madurai city, with the river Vaigai flowing near by, is justifiably known as a temple city because it is built around the renowned temple of Lord Siva, revered as Sundareswara  and his divine consort Meenakshi.

The temple with four gopurams or pagodas built over its four doors in the North, South, West and East is an imposing architectural marvel.
The temple has a hall with 1000 pillars in it called the ‘aayirakkal mandapam.’ In it one can find two specimens of musical pillars.
There are five such groups of pillars in the North Adi Street near what is known as ‘Mottai Gopuram’ or the incomplete pagoda. Each group of musical pillars has a central column  surrounded by groups of  slender columns chiseled from the same stone.  Each one of these slender columns produces a different musical note when gently struck with a small wooden rod.
We have an idea of   when they  were made or who caused them to be made.
But, who made them?
Article by : P. N. Santhanagopal
Source: Bhavan's Journal 31 August 2008
To know more about Bhavan's Journal and to subscribe
visit: http://www.bj.bhavans.info/
Posted by Bridge-India at 15:53
Email ThisBlogThis!Share to TwitterShare to FacebookShare to Pinterest
Labels: Temples and Legends : Tamilnadu