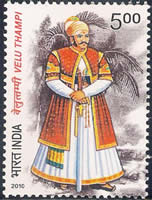 An Administrator Par ExcellenceVelayudhan Chempakaraman Thampi (1765-1809),  known as Velu Thampi was the Dalawa or prime minister from 1802 to 1809 during the reign of Bala Rama Varma Kulasekhara Perumal, the Maharaja of Travancore, one of the powerful kingdoms in  pre-independent India.
He came from a family honoured with the title of Chempakaraman for its services to the kingdom by Maharaja Marthanda Varma. Thampi  also earned the title given to select noble families in Travancore.
Velu Thampi was born in the village of Kalkulam to Kunjumayitti Pillai and Valliyamma Pillai Thankachi on  May 6, 1765, at Thalakulam, a district in Travancore. He led a disciplined life and was an exponent in martial arts. He was also an able administrator who sacrificed his life for the independence of India way back in the 18th century. From a position of Kariakar (Tehsildar) to Mulakumadiseela Sarvadhikariakar, he rose to become the Dalawa of the  kingdom.
Velu Thampi initiated several reforms during his Diwanship like the establishment of schools in all karas (local divisions), re-survey of land, reclamation of the barren land, construction of canals and roads, establishment of law courts etc. He made primary education compulsory. Assessment of tax based on the yield (kandezhuthu) was his innovation.
His administrative reforms helped in improving trade and commerce. He also tried to bring in peace and tranquility within the state by resorting to harsh punishment to all law-breakers. Flogging, cutting of ears and nose, nailing people to trees etc. were common during his Diwanship. He could put an end to corruption and injustice by launching a touring court to hear the grievances of the public and pronounce immediate judgments.
Velu Thampi was the first ruler after Pazhassi Raja to use defence tactics against the British. Though the Sepoy Mutiny of 1857 has been referred to as the first freedom struggle, it was Velu Thampi who first raised the voice against the British in 1809.
He  led the rebellion against the British which started as a direct fall out of the British Resident Macaulay’s interference in the internal affairs of Travancore. Initially, he was helped in his cause by Paliath Achan, the Diwan of the Kochi kingdom, but in the later stages, he fought a lonely campaign against the British.
While his predecessors enjoyed the privilege of drawing money from the treasury, Velu Thampi fixed a monthly salary to the officials and also cut the allowance of the soldiers. This had led to an immediate revolt in the army. Though a good administrator, his stern and tough stand alienated him from some of the nobles as well.
In his protest against the British, Velu Thampi addressed a large gathering at  Kundara on January 11, 1809 which later  came to be known as the Kundara proclamation. It was an open call to arms which demanded the ouster of the British from Indian soil. He proclaimed: “Don’t allow the  English forces that hurt us even for a second. Wash them out”.
The proclamation had its effect and the whole kingdom rose like one man against the British. He was no match for the military might of the British Army. It was a tragedy that Velu Thampi failed militarily although he commanded a well-trained army armed with muskets and artillery organised on European lines with 3,000 men and 18 guns! After his defeat at the hands of the British, Velu Thampi had to flee from his kingdom.
Meanwhile, the East India Company entered into a Treaty of Subordinate Isolation with the Maharaja of Travancore, offering its troops to ward off internal and external threats. Though this meant that the Nair Army which had fought bravely for the crown during the Third Mysore War would be disbanded, the Maharaja was supportive as it helped him maintain his throne while taking away a threat to his rule from future local rebellions. With the treaty, the Maharaja could call up the East India Company’s army to put down civil uprisings, not to mention anything about saving money. This treaty was used by the East India Company in other princely states of India.
Velu Thampi had spent his last days at Mannadi and reportedly ended his life to avoid being humiliated by the British at the Bhagavathi Temple on May 6, 1809. The Velu Thampi Dalawa Memorial constructed  at Mannadi near Adoor has been a fitting tribute to this great son of India who fought against the British 200 years ago!
Note:
A commemorative postage stamp marking the 201st death anniversary of Velu Thampi Dalawa or Diwan of the erstwhile Travancore kingdom who revolted against the British 200 years ago, was released on May 6, 2010
Article by : V. N. Gopalakrishnan
Source: Bhavan's Journal 30 September 2010
To know more about Bhavan's Journal and to subscribe visit: http://www.bj.bhavans.info/
Posted by Bridge-India at 12:03
Email ThisBlogThis!Share to TwitterShare to FacebookShare to Pinterest
Labels: Great Indians