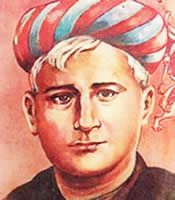 Pioneer of Indian Nationalism Bankim Chandra Chatterjee, was one of the most celebrated Bengali novelists and pioneering essayists. Born in Kantalpara near Naihati (West Bengal) in an orthodox Brahmin family on  June 26, 1838, he was one of the first two graduates of the Calcutta University in 1858. His  education was in Midnapore Collegiate School followed by Hoogly College and Presidency College for higher education.
Bankim Chandra had a brilliant academic record. He started his literary career in the late 1850’s. The Sahitya Samrat- the intellectual giant published Bankim Chandra’s fiction and non-fiction writings.
His writings first appeared in the monthly Banga Darshan, edited and published by himself  between 1872 and 1876. In fact, Banga Darshan  is the fountainhead of his creative thinking as it contains the serious and evaluative work on literature, art, science, philosophy and religion. Later in the eighties, Prochar was published under his guidance.
Bankim Chandra’s publication work started with a number of youthful compositions in the Sambad Prabhakar. His first book of poetry was ‘Lalita O Manas’. ‘Raj Mohan’s Wife’ was the first work published in a series, which explored for the first time the making of a talented author.
Moreover ‘Durgeshnandini’ written,  between 1862-1864 was published in a 1865 ushered in a new era in Indian literature as his first Bengali novel.
Bankim Chandra was a pioneer — the master of his craft, a reformer and a true builder of a nation like India. In Krishnacharitra, he dispelled superstitions with reason, mythology with history and dogmas with scientific principles. Shri Krishna is a person for Bankim Chandra.
Through his theistic character, Bankim Chandra tried to establish humanism. In Krishnacharitra, he establishes the historical existence of the timeless monument of the legendary figure (Shri Krishna) of the Indian soil and also the logical impossibility of a man being God.
Rabindranath Tagore said that in Krishnacharitra, Shri Krishna is not the lead character — the free-thinker that resides in the human mind. Sri Krishna represents the good and the pure supreme consciousness which is present in every human being. In Krishnacharitra it is that free-thinking mind, the author has glorified.
Again the sense of humor is captured in his work ‘Kamalakanter Dapter’, published in 1875. But the spontaneity of patriotism followed finally in the concept of ‘Vande Mataram’, when he was a government official under the British Raj around 1876.
The poem added the patriotic fervour to  his novel ‘Anandamath’, published in 1882. Jadunath Bhattacharya was later on asked to set the tune for this song. Vande mataram was coloured with political fervour by Rabindranath Tagore at the session of the Indian National Congress in 1896.
This hymn depicts the pure infinite strength of Goddess Durga. Strength cult is identified as the national personification of Bengal in Indian Independence Movement. Gradually, Vande Mataram (I do homage to the mother) became the National Anthem of Bengal.
Bankim Chandra’s contribution to our national movement is not confined to the national song ‘Bande Mataram’ alone. Being the Deputy Magistrate and Deputy Collector, his service to the British Government became a boon to the common people of Bengal.
Again the Treatise ‘Dharmatattva’ (Principles of Religion) published in 1888 depicts his religious discourse on Hindu religion. Bankim Chandra’s Religious Philosophy is a venturesome attempt to explore the necessity of Dharma from the natural standpoint. He justifies Hindu religion as against the attitude, which tries to discard Hindu idolatry totally. He espouses an alternative to save Hindu Religion and to make it free from conventional beliefs, so that it can help in the elevation of human society consciously.
Being a rationalist, a moralist and vice versa, Bankim Chandra depicts in Dharmatattva, that it is only after exploring the core, the true religiosity of the Hindu religion can be arrived at.
The philosophical interpretation which binds the treatise is theistic humanism and self-less activities and not emancipation through asceticism.    We see that his transition to the field of religion can be recalled as only natural.
It is through his writings that he became the prophet of his people,  a synthetic fusion of the medieval and the modern. In his blending of  East and  West and in harmony of the spiritual life force of the Indian culture lies the secret of his success. Full credit should be given to Bankim Chandra for his appealing approaches and applications of the ‘Rationalistic Method’ while justifying science, philosophy and religion.
The goal of this religious scientist is to discover that ‘unity’ admits in all the varieties of nature.
There can be no fight between science and religion. Science is the cause for social progress, while Dharma guides world progress. The theme in his treatise ‘Dharmattatva’ is both ‘the glory of the name of Hari’ and ‘of science are just one’.
Dharma for Bankim Chandra is culture or anusilan that is the true means to acquire happiness. Religion thrives  in belief. Religion also assumes that worship enables us to develop culture. Religion as such entitles both our love and worship of nature. Bankim Chandra talks like a ecologist in many of his essays briefing that ‘Nature is God Himself’. So to worship nature is to worship God. Worshipping God helps in promoting  culture.
Bankim Chandra’s illustration through this ‘Spiritual Naturalism,’ represents the view of modern environmental scientist, advocating ‘Eco-consciousness’ and Eco- logical balance in Nature. He stands on his originality apart from modern environmentalists, identifying nature with God, the indwelling spirituality.
To him, achievement of God is happiness itself because God Himself is great joy and bliss.
Article by : Sucharita Dey
Source: Bhavan's Journal 31 August 2010
To know more about Bhavan's Journal and to subscribe visit: http://www.bj.bhavans.info/
Posted by Bridge-India at 11:26
Email ThisBlogThis!Share to TwitterShare to FacebookShare to Pinterest
Labels: Books and Authors