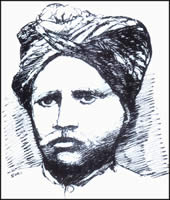 When the Telugu region was wrapped up in the darkness of superstition and social vices in the nineteenth century and the Telugu people were in a state of somnolence, there appeared on  April 16, 1848, a star, which heralded the dawn of a new era and marked a new awakening. And that was Sri Kandukuri Veeresalingam Pantulu.
After his matriculation, Veeresalingam passed several departmental tests, which made him eligible for posts in the revenue and judicial departments. But he chose to be a teacher. He devoted his spare time to the improvement of society and promotion of literature. He was an ardent student of the old classics, and undertook the trouble of rescuing from oblivion many a precious treatises. After a golden age of literature, a period of decadence had set in.
It was a time when simple and lucid style was anathema even for newspapers and periodicals. High-sounding language was considered the hallmark of the quality of writing. Veerasalingam proved  that he was capable of performing all the time-honoured poetic feats and of exploding the bombast of prose.  After establishing himself as a traditional writer, he demonstrated to the world the worthlessness of artificiality.
Invaluable are the treasures of Sanskrit literature. Veerasalingam translated a many Sanskrit works into Telugu. Elegant literature and humanities do not constitute a balanced educational diet.  Veeresalingam wrote on scientific subjects like physiology, zoology and astronomy in a style intelligible to the layman.
At a time when English was predominant, Veeresalingam gave Telugu an elevated status. He developed the latent power of Telugu for scientific expression and pioneered in coining technical terminology Telugu.
Essays, novels, biographies, dramas farces and satires were all his gift to Telugu. His Sweeyacharita was the first autobiography and his Rajasekhara Charita, the first novel in Telugu. This novel was translated into English under the title, Fortune’s Wheel. He wrote a Telugu grammar on modern lines and a series of graded readers for school children.
Veeresalingam used his pen also as a weapon for striking hard at social evils. He edited and published many journals. He was perhaps the first pathfinder in the field of research. His History of Telugu Poets was a monumental work, which involved tremendous labour, patience and perseverance.
Veeresalingam was essentially a rebel and a reformer. The society of his times was abominable. High officials and “Gentlemen” of the citizenry were addicted to courtesans. He who kept a whore was respected. Chastity was looked down upon as unmanliness. Dance parties by prostitutes were a must at every function and offer of presents to them was an honourable gesture on the part of “respectable men” Veeresalingam waged a relentless war against this odious perpetration.
Honest men who refused to accept bribes were counted as stupids and imbeciles. Veeresalingam declared a crusade against this heinous crime, and brought to light misdeeds of officials.
Veeresalingam fought for equal rights and privileges for women. The popular notion of the times was that education would spoil the weaker sex. Amidst the uproar of the die-hards, Veeresalingam established schools for girls, and wrote special books for the enlightenment of women.
Child marriages were the order of the day. Little girls were “sold” in marriage to old men, and when the innocent girls were widowed, they had to go through a lifelong ordeal. Veeresalingam had to suffer religious ostracism, and social boycott and to face missiles and the threats of assassination.
But he was an undaunted hero. He achieved his object of removing the stigma on widows and rehabilitated them as respectable housewives.
Veeresalingam was a true theist. He was against idol worship. He fought against superstitions. He challenged widely prevalent beliefs in ghosts, omens, divination, sorcery and horoscopes.
Veeresalingam founded many institutions a town hall, a Prathana Samaj, a widows’s home, a high school. For the establishment and maintenance of welfare institutions, he brought into being the Hitakarini Samaj an endowed to it, through a trust deed all his movable and immovable properties, which, were valued then at over Rs. 41,000.
Champion of the suppressed, Veeresalingam passed away at Madras, on May 27, 1919. His last act was the correction of the proofs of the History of Telugu Poets.
Verily, the hallowed memory of Sri Veeresalingam will be loved, honoured and cherished by the Telugus the world over for decades.
Article by : T. D. Jagadesan
Source: Bhavan's Journal 31 January 2007
To know more about Bhavan's Journal and to subscribe visit: http://www.bj.bhavans.info/
Posted by Bridge-India at 14:14
Email ThisBlogThis!Share to TwitterShare to FacebookShare to Pinterest
Labels: Great Indians : Andhra Pradesh