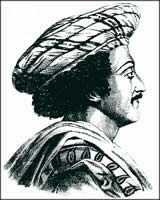 Raja Rammohan Roy : A True Social ReformerRaja Rammohan Roy was born in 1774 in a rich but orthodox Brahmin family.  Since childhood, he was opposed to orthodoxy and superstition.  At the age of 35, in 1809, he wrote a small book in Persian, “Tuk fat-ul-Muvahiddin”, ‘Gift to Monotheists’ in which he condemned idol-worship and appreciated monotheism.

Raja Rammohan Roy was a great scholar who knew over a dozen languages including Sanskrit, Persian, Arabic, English, French, Latin, Greek and Hebrew.
In 1805, he joined the service of East India Company and served the company for 10 years.  After that, he devoted his life for the welfare of humanity.  He settled in Calcutta in 1814 and soon attracted a band of young men with whose cooperation  he started, ‘Atmiya Sabha’.  In order to protect the Hindu religion, he founded the ‘Brahmo Sabha’ in 1829 which was later on known as the ‘Brahmo Samaj.’
Rammohan Roy translated the various sacred texts and reinterpreted them to defend his stand on social and religious problems. His attack on orthodox Hindu customs was not due to any narrow sectarian bias or dogmatism, but guided by his desire to reform Hinduism of superstitions and priestcrafts that had developed during the centuries of ignorance.
Rammohan was dead against idol worship.  According to him, idolatry in Hinduism was the main cause of useless and costly ceremonies.
On the basis of his personal studies of the Hindu scriptures, he said that Hinduism was different from what was interpreted by the priests.  According to him, the Upanishads sought to liberate the soul from the vicious chains of superstitions. In his desire to purify Hinduism, he wanted to remove the barriers between it and other religions. He seriously considered a universal religion which would one day be accepted by the whole of mankind.
He was the creator of Indian Press.  Samachar Darpan, the weekly he brought out, the first of its kind, helped his generation to know western literature and science, and that, in turn, paved the way for the growth of Indian literature, and in building up a scientific outlook and temperament in Indians.  The modernising influence of this weekly on other Indian languages was instant and everlasting.
The fact that Akbar II, son of Shah Alam, deputed Roy as his envoy to the court of St. James and the fact that, despite the opposition of the Governor-General, Akbar II conferred on Roy the title Raja proved in how high esteem he was held.
It was the recognition of his sparkling intellectual qualities and integrity that Jermey Bentham addressed him as the “Collaborator in the service of mankind”.
As Max Muller put it, “Roy was the first who came from the East to the West, the first to join hands and complete that circle through which, like an electric current, Oriental thought could run to the West and Western thought return to the East.
Raja Rammohan Roy’s life itself was an act of bridging the gap between India and Europe.  He breathed his last at Bristol in 1833 at the end of an eventful life dedicated to the reawakening and reformation of India.  He taught that “the ideal of human civilisation does not lie in the isolation of independence, but in the brotherhood or interdependence of individual as well as nations in all spheres of thought and activity.”
‘Brahmo Samaj’ believed in one God and discouraged idol-worship.  He criticised the priestly class who were responsible for all the rituals.  Roy raised his voice against social ills such as Sati, child marriage, polygamy, etc.  He was against  purdah system and widowhood. He supported widow-remarriage and strived to earn high position for women in the Hindu society.  It was through his efforts that Lord William Bentick declared the practice of Sati as illegal in 1829.  Besides, he also strived to abolish untouchability and human sacrifice.  He wanted to eradicate superstitions and useless rituals.  He, therefore, co-operated with William Bentinck in propagating Western education in India.
Raja Rammohan Roy was the first great thinker of modern India who urged social and religious reforms on rational principles.  His place as the first builder of a new and renascent India is beautifully described by Ms. Sophia Collett in the following words:
“Rammohan Roy stands in history as the living bridge over which India marches from her unmeasured past to her incalculable future.  He was the mediator of his people, harmonising in his own person, often by means of his solitary suffering, the conflicting tendencies of immemorial tradition and an inevitable enlightenment.”
Article by : Kuldeep Kumar
Source: Bhavan's Journal 31 January 2007
To know more about Bhavan's Journal and to subscribe visit: http://www.bj.bhavans.info/
Posted by Bridge-India at 14:08
Email ThisBlogThis!Share to TwitterShare to FacebookShare to Pinterest
Labels: Great Indians: West Bengal