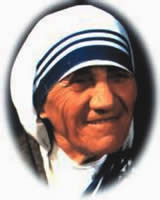 Asked about the most joyful place she ever visited, Mother Teresa replied that it was Kalighat, where people die in peace, in the love of God.
Obviously she was referring to Nirmal Hriday, a home for the dying destitutes.  “Nobody in Nirmal Hriday has died depressed, in despair, unwanted, unfed or unloved. That is why I think it is the treasure-house of Calcutta. We give them whatever they ask for, according to their faith. Some ask for Ganga water, some for Holy Water, for a word or for a prayer… We help them to say sorry to God. To make peace with God according to their faith.”
The story goes that the Mother felt the need for such a place when she picked up a middle-aged woman lying in pathetic condition outside the Campbell Hospital (present Nilratan Sarkar Hospital). She convinced the authorities that it was a shame for people to die on city streets and eventually got permission to start her home in an abandoned dharmasala near the Kali temple.

It would be a mistake to consider Mother Teresa’s work being all about death and gloom. She helped the poor in dignified living too. Shishu Bhavan represents the more hopeful side of her mission to provide a better life to the abandoned and homeless children.
Infants come here from all the places. Some are picked up from the pavements and garbage dumps, some are brought by the police and city hospitals, others are left at its doorsteps by unwed mothers and poor parents. Many of the babies are premature, crippled and retarded. Shishu Bhavan refuses no one. Inmates are given education and vocational training. Grown up girls are often got married.
Shishu Bhavan also serves as an adoption centre, where infants find new homes. Mother Teresa encouraged adoption as a part of her crusade against abortion. She played a major role in changing peoples’ attitude towards adoption in India. Although she had been occasionally accused of placing Indian children overseas,  it must be admitted that it is due to her pioneering efforts that many physically challenged children find happy homes in other parts of the world.

The leprosy afflicted were a class apart in Mother’s constituency. Lepers were a common sight in India. Traditionally, leprosy was thought of as a punishment from God to be accepted without complaint. There was hardly any help for the lepers except  public dropping of a few coins into their begging bowls. Mother Teresa was determined to change the lives of these pitiable creatures living in unhygienic conditions. She dreamt of creating a sanctuary, where “they can also stand like ordinary people and do ordinary things and lead an ordinary life.”
Shanti Nagar, near Asansol in West Bengal, represents fulfillment of the Mother’s dream of an independent habitat and rehabilitation centre for the lepers. Built over 34 acres of land granted by the Government with the untiring dedication of her followers, it is like an oasis in barren land complete with small cottages, its own hospital and Shishu Bhavan.