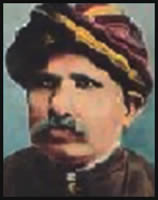 Kandathil Varughese Mappilla: A Multifaceted GeniusMalayala Manorama made big headlines by opening a news channel incorporating the most modern technology in its operations and its advent into this new field on the Malayalam New Year (17-8- 2006). It has been welcomed by the discerning public not only in Kerala but also in the country as a whole. At this juncture, it is but appropriate to reminisce on the foundation and growth of this great newspaper. More than that, we would do well to remember the founder of this great enterprise, who has made a mark not only in the history of journalism in India, but also made giant strides in the industrial, commercial and cultural fields of Kerala.
Kandathil Varughese Mappilla, a pioneer in the above mentioned areas who lived only for 47 years, was born in 1857, at Thiruvalla in Central Travancore. Son of Eapachan of Karuthanallor house, Varughese was blessed by the muse from his  early years and after mastering the rudiments of Sanskrit, he began composing poems even as a student. His college education at Kottayam and Trivandrum extended only upto intermediate and after a stint of journalism in “Kerala Mithram” at Kochi, he joined the CMS High School as Malayalam Munshi. It was during this time that the young Varughese, who was just around 30, made a momentous breakthrough in establishing the Malayala Manorama company, pioneering the induction of the Manorama newspaper. Alongside, he set up a literary society named ‘Bhashaposhini’, which heralded a comprehensive development and popularisation of Malayalam language.
Mahakavi Ulloor Parameswara Iyer, one of the foremost Malayalam poets, paid encomiums to Varughese Mappilla, hailing him as the architect of modern Malayalam literature, bringing the language to its preeminence among the contemporary languages of India.
For Varughese, journalism was not only a mission, but also a powerful tool for social uplift. The editorial in the first issue of Manorama was on the education of “Pulayas”, one of the most backward and depressed castes of Kerala. During the last decades of the 19th century, Travancore, which was a princely state, was in the throes of a social upheaval and the great contribution of this revolutionary idealist is worth engraving in letters of gold.
The objectives of the paper was to inform, educate, publicise and propagate progressive ideas. Entertainment also found a slot in the publications. For over 12 years, he strained every nerve for the success of this massive endeavour with resounding success. He sacrificed his body, intellect, influence and financial resources for achieving his goal, with rare dedication and single-minded attention. Modernising Malayalam language was no easy task and Varughese Mappilla, with great foresight, emphasised the need for improving the “type script” which would revolutionise printing at a later period of time.
Among his literary masterpieces, Darpa Vichedam, Keerthana Mala, Kalahini Damanakam drama (a translation of Shakesperian drama--Taming of the Shrew), and Satchaithra Satakam are worth mention. Saddled with various responsibilities, he could not isolate himself to literary pursuits alone. Nevertheless, his overall contribution to literature and journalism cannot be overemphasised. His motto was “service to others” in the true sense of the term.
Industrial activity in India in the late 19th century was very feeble and with the restrictions imposed by the British Government of the day, it was well neigh impossible for any entrepreneur to venture into any initiative in this direction. However, Varughese Mappilla was a dreamer, who nurtured magnificent obsessions and the industrial empire built by the succeeding generations of this great visionary, bears ample testimony to the grand ideas conceived and passed on to posterity by this great son of Kerala. The seeds sown by Kandathil Varughese germinated and over a period of hundred years grew into a massive industrial foundation.  The brand names like MM Rubbers, MM Foam, MRF etc., are extremely popular among the discerning clients across the country.
Varughese Mappila passed away in 1904. but the trail blazed by him continues to inspire his descendants, who have been the torchbearers of this illustrious patriarch.
Article by : R.Ramdas Thampuran
Source: Bhavan's Journal 15 September 2007
To know more about Bhavan's Journal and to subscribe visit: http://www.bj.bhavans.info/
Posted by Bridge-India at 11:59
Email ThisBlogThis!Share to TwitterShare to FacebookShare to Pinterest
Labels: Great Indians : Kerala