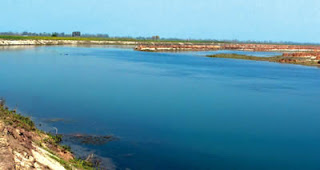 Like the river Ganga, the river Yamuna has played a legendary role in Indian History. Indian mythology, literature and art are replete with references to the river Yamuna from time immemorial. Akin to the river Ganga, the river Yamuna has given a place in the oldest Veda, the Rig Veda.
This river has been described graphically as life sustaining mother, its water is like “Payas” or milk which nourishes children.
In mythology, Yamuna is the daughter of Sarayu and sister of Yama (The God of Death). It was represented in art as a river Goddess standing as a “Dvarapalika” at the doorways of temples to purify the devotees.
During the Gupta period, the Yamuna represented as celestial damsel, at times holding garlands of lilies and lotus flowers with swans flying in the background. The banks of the Yamuna were the hallowed grounds for the romance between Lord Krishna and Goddess Radha.
Lord Shiva’s blue throat has been described as an embrace of the Yamuna, asserting her right to an equal place in the Lord’s affection along with the Ganga that flows from Shiva’s head. Besides, the Yamuna, a sparkling river used to flow like a silver ribbon skirting Emperor Shah Jahan’s heavenly place – the Red Fort in Agra.
With its source in the pristine Himalayan Yamunotri Glacier, the Yamuna is 1376 km long between this point of origin and Allahabad in Uttar Pradesh (India). At Prayag, the Yamuna falls into the Ganga.
The annual flow of water in Yamuna is about 100,000 million kilolitre. About 80 per cent of this amount flows during the three months of monsoon. Three dams built on the river, however, affects the flow of water during rainless seasons.
Like the river Ganga, the Hindu religious books attach divine importance to the river Yamuna also as places like – Prayag (Allahabad) and Ujjain are either situated on the river Yamuna or on its tributaries.
Kumbh Mela is celebrated every 12 years in these two places, alternatively. Therefore, since centuries, this river has also been a centre of religious, political and cultural activities like the Ganga river. But alas! The water of the river Yamuna has these days become highly polluted.
Domestic sewage, industrial wastes, open defecation, surface runoff, fertilizers and pesticides, residues and cremation of dead bodies on the banks of the river are the main causes for Yamuna’s pollution.
The river Yamuna, in fact, has now become one of the most threatened riverine ecosystem of the world especially from Wazirabad to Okhla.
It is evident from Biological Oxygen Demand (BOD) which has gone upto 18 mg L–1 against  value of 3 mg L–1. Dissolved oxygen level has come down to an alarming zero, the ideal level being 5 mg L–1.
Due to massive pollution, water of the Yamuna is not only unsafe for drinking purposes but has little scope for sustaining any kind of aquatic life. On June, 13, 2002, thousands of fishes died due to heavy pollution in the river near Agra. The river has also lost its free flowing capacity (self cleaning capacity).
The degeneration of the river is becoming a major health hazard for the people resulting into diseases like malaria, tuberculosis, cholera, typhoid etc.
Drinking water of South Delhi is badly polluted. Despite chlorination treatment, the water is not free from amoeba, bacteria and other organisms.
In some water samples, strains of Mycobacterium, Salmonella and parasites like hookworms and Entamoeba histolitica have been seen.
One of the methods to control river water pollution is to recharge the drains and to recycle sewage. Domestic wastes can be solved by constructing one main drain in Nizammudin (Delhi) with other drains emptying into it. This facilitates an easy and quick recycling of the wastes through a sewage treatment plant.
Chemicals like aluminum sulphate can be used for cleansing of water.
Use of crushed seed powder of Moringa oleifera has proved useful in cleansing the polluted water. Being ecofriendly and biotic in nature, this method to clean the water must be preferred. Activated Sludge Process (ASP) based on the principle of aeration, can also be used in case of waste water treatment having more BOD values. Since forests in and around cities/towns and industrial areas are much more capable of absorbing a number of pollutants, so conservation of forests is the need of the hour. Felling of trees should be banned.
The citizens must make all out efforts to cover all wastelands on the banks of the Yamuna and its catchments. Plantation should be done in consultation with local people as they are best judges in selecting trees/plant species. Deforestation and overgrazing of pastures in the catchment areas should be strictly prohibited.
To arrest the growing pollution of the Yamuna river, the Environment Department of Government of India has launched a Yamuna River Action Plan. The key components of the plan which has been modelled on the basis of the Ganga Action Plan, are : (i) Interpretation and diversion of waste water; (ii) Establishment of sewage treatment plants at low cost sanitation; (iii) Improvement of wood crematoria; (iv) Afforestation along the river banks as well as its catchments and (v) Biological conservation of aquatic species.
Article by : R. D. Gupta
Source: Bhavan's Journal 15 July 2008
To know more about Bhavan's Journal and to subscribe
visit: http://www.bj.bhavans.info/
Posted by Bridge-India at 15:02
Email ThisBlogThis!Share to TwitterShare to FacebookShare to Pinterest
Labels: Indian Monuments and Places : Rivers