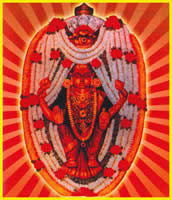 Kateel, the famous pilgrimage centre with the temple dedicated to Mother Goddess, Shri Durgambika, in Dakshina Kannada District of coastal Karntaka, does not need any introduction. With an hour’s journey by bus from Mangalore, it is situated on the bank of the holy river, Nandini, daughter of Kamadhenu, the wish-fulfilling celestial cow which came to the earth to bring solace to the drought-stricken people in the days of yore.
According to a popular legend, the place derived its name from a Harijan youth, Katla and his mother discovered the sacred linga of Mother Goddess hidden in a leafy bush. Although the deity is named, Sri Durga Parameshwari, mythologically, she is known here as Sri Bhramarambike or the Mother who had assumed the form of a Bumble Bee. She had to assume this form as a boon secured by a demon called Arunasura who could not get harmed by any living creature that had two or four legs!
In this region, many of the temples celebrate a festival called Brahma Kalash when the deity will be reinstalled after renovations and Kateel Temple organised this festival on        April 5, 2007, followed by another programme called Naga Mandal, a rare form of serpent worship, on  April 6, 2007.
Both the programmes drew large number of devotees who were given as prasadam  midday and night meals, besides light refreshments day and night. On April 5, over  lakh devotees participated and on the 6th, the figures touched one and a half lakh. The huge crowds were comparable to that of the Kumbha Mela festivals in the Northern India.
Going by the financial aspects, the programme was conceived, planned, financed and executed barely within 45 days with an overall budget of Rs.3 crores. Mother Goddess in Kateel is everybody’s deity, going beyond class or creed, high or low social status. Every one is her child and that is the philosophy with which the temple works. When the announcement for Brahma Kalash and Nagamandal was made, devotees came up not only with cash donations but also in kind—with truckloads of articles and foodgrains, vegetables and fruits. Although the main programmes were on April 5 and 6, 2007, the festival was in fact for 10 days from March 28. Everyday various ‘havans’ and other religious programmes were conducted in the temple, besides cultural programmes and discourses by eminent people in the evenings.
The main programme of Brahma Kalash or the ceremonial holy ‘abhishekh’ of 1008 silver kalashas took place at 9.15 a.m. on April 5. The main kalash known as Brahma Kalash of solid gold with artistic carvings, specially made for the occasion, valued at Rs.25 lakhs was gifted by the devotees from Mumbai.
A rare event of serpent worship called Naga Mandal was also organised. It was like a serpent, dancing to the tune of the folk songs accompanied by the beating of a hand drum called dakke. Devotees dance  by going round in a circle in which the picture of a serpent with five hoods with its long tail is depicted. On the top of this there will be a human face.
The naga mandal, a rare event, is performed with utmost care, devotion and dedication as the serpent god, it is believed, would not tolerate if there was even a lapse.
On Brahma Kalash day, two speakers stole the show and they were Shri D.Veerendra Heggade, the Dharmadhikari of Shri Dharmasthala and Shri Vishwesha Tirth Swamiji of Shri Pejavar Math. Shri Heggade called on the priests  to be sincere and faithful in their duties to maintain the sanctity of the temples. Shri Vishwesha Tirth in his inimitable style declared that the wealth earned by people in fact does not belong to them but is given by God as trust property. Therefore, one has to donate a part of it for the cause of the society and another part as an offering to God.
An event like Brahma Kalash should inspire people to install God in their hearts and devote for the welfare of all.
Article by : K.G.Mallya
Source: Bhavan's Journal 15 June 2007
To know more about Bhavan's Journal and to subscribe visit: http://www.bj.bhavans.info/
Posted by Bridge-India at 13:54
Email ThisBlogThis!Share to TwitterShare to FacebookShare to Pinterest
Labels: Temples and Legends : Karnataka