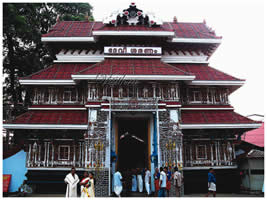 The Shrine of Vadakkunnathan, Thrissoor, Kerala.One of the oldest and perhaps the grandest temples in Kerala is the sacred Vadakkunnathan temple in Thrissoor or Thrissivaperoor.

The temple stands on a beautiful hillock at the centre of the town. The vast ground that surrounds the temple is called ‘thekkin kadu’ or the forest of teak wood trees. The entire city is built around the temple.
In the centre of the temple one can find the shrines of the main deities, Lord Siva or Vadakkunnathan, Lord Sankaranarayana and Lord Sri Rama.
On the same circular shrine for Lord Vadakkunnathan in the rear, one can find the shrine for Mother Parvathi, the Divine Consort of the Lord.
The most striking feature about the presiding deity Lord Vadakkunnathan is that it is always covered with a thick and solid coating of ghee.
No matter how hot and humid the temperature may be, the ghee never melts. For days, months and years the ghee remains in place but it never emits any offensive smell or become rancid. Nor can one find any insects or ants which are normally attracted by the presence of ghee. This odorless, always solidified, ghee is considered to possess great curative value. The shrine is free from insects because of the ambiance within the sanctum sanctorum.
Historical records may reveal the name of the King or kings who had caused the shrine to be built. No matter where you look, the names of the architects who conceived and built the sanctum sanctorum in such a way that the ghee covering of the Lord always remains solid, does not emit any offensive odour or attract ants and other insects can never  be found.
Who, indeed, were they?
Article by : P. N. Santhanagopal
Source: Bhavan's Journal 31 August 2008
To know more about Bhavan's Journal and to subscribe
visit: http://www.bj.bhavans.info/
Posted by Bridge-India at 15:55
Email ThisBlogThis!Share to TwitterShare to FacebookShare to Pinterest
Labels: Temples and Legends : Kerala